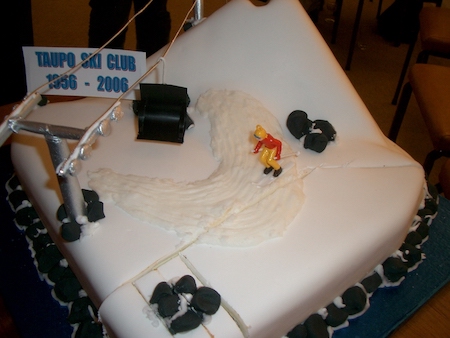 "We are celebrating Taupo Ski Club’s birthday and a time 50 yrs ago when our founders established the club.

This is an opportunity to pay tribute to founding members of the club and other major contributors, and acknowledge their descendent's who are still contributing to the club.

My name is Harry Keys, and I have a keen interest in Ruapehu, TNP, skiing and climbing. My first trips to TNP were in the 1960s with my parents and siblings. My first climb of a Ruapehu peak was Paretetaitonga in 1969 and I’ve been more or less involved ever since. Our family joined the club in 1999. I love staying in lodge. This is an opportunity to thank those who built lodge, maintained it, rebuilt it, and added to it. Tonight I found out that the 2 bunkrooms on the right of the entrance passage are part of the original hut much of which was burnt down in the late 1950s. I had thought the whole hut had burnt down.

As for this event I’d like to thank Ali Mazey and Helen Spencer who have advertised and organised food, Karen Williams and the Museum for other support and the venue, and Jan Robinson for the display.

Tonight the club has been presented with two new trophies for Junior Boys and Girls snowboarding. Thanks to the Beange and Murray families. Also we congratulate Rebecca Sinclair for her achievements winning the under 14 age class at the World Youth snowboard champs in Italy, and note the warm thanks to Taupo Ski Club in the article in Curl magazine. Also, thanks to Anne Battersby, we have an opportunity to purchase from a range of midlayer clothing carrying the club logo with the dates 1956-2006, with profits going to the club. I don’t know everyone here but I hope you enjoy yourselves”